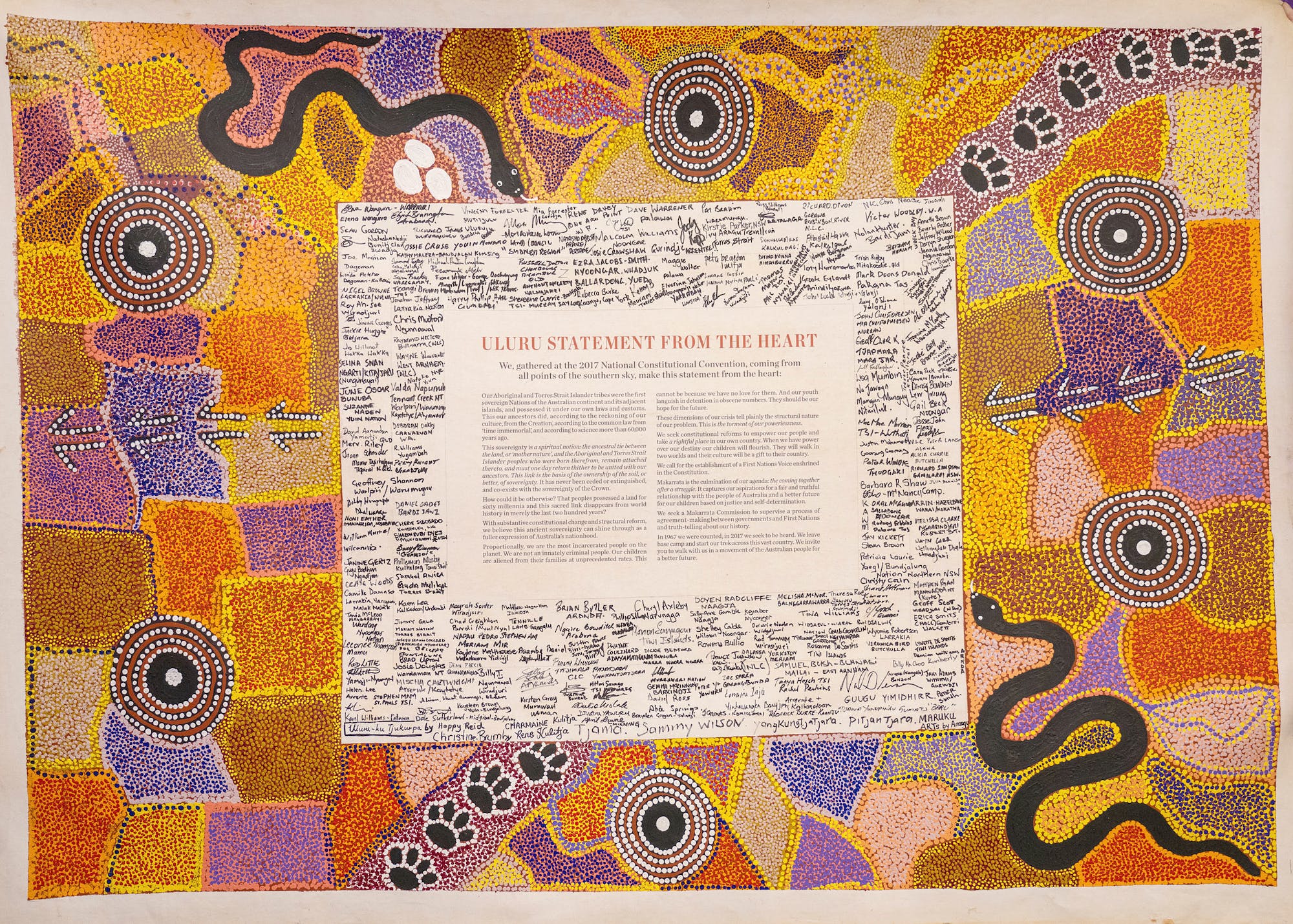 The Uluru Statement from the Heart.

The Australian Government has committed to holding a referendum for a Voice to Parliament. It is a once-in-a-generation opportunity to give First Nations People real input into the laws and policies which impact their lives.

Since Federation in 1901, Aboriginal and Torres Strait Islander people have advocated for constitutional reform to recognise their rights as the First People of Australia. In 2002 Prime Minister John Howard committed to putting constitutional recognition of Aboriginal and Torres Strait Islander people to a referendum. Every prime minister since – Kevin Rudd, Julia Gillard, Tony Abbott, Malcolm Turnbull, Scott Morrison, and Anthony Albanese – maintained this commitment.

After comprehensive local and regional dialogues across the continent, in 2017, over 250 Aboriginal and Torres Strait Islander Delegates gathered in the shadow of Uluru and put their signatures on The Uluru Statement From The Heart, addressed to the Australian people it invited the nation to create a better future via the proposal of key reforms, the first “Enshrining a First Nations Voice in the Australian Constitution.”

In 2022, the Yarrabah Affirmation again invited Australians to join a movement for a better future, and a majority of Australians have accepted the invitation, and support a First Nations Voice.

A Government Constitutional Expert Group made up of legal academics explains that “The voice does not confer ‘rights’, much less ‘special rights’, on Aboriginal and Torres Strait Islander peoples… Nor would the voice change or take away any right, power or privilege of anyone who is not Indigenous.”

The Voice will not:

This referendum is not without precedent. In 1967, a historic referendum sought to change two sections of the Constitution in relation to Aboriginal and Torres Strait Islander peoples – 90.77% of Australian voters voted ‘Yes’ to the changes, and every single state and territory recorded a majority result for the ‘Yes’ vote. It was one of the most successful national campaigns in Australia’s history.

Marcia Langton writes in The Conversation that "It is the duty of Australians who want to build a nation that recognises 65,000 years of human history, who want to accord First Peoples a rightful, honourable place in the nation’s fabric, in the warp and weft of its foundational document, to convince their family members, friends, neighbours and colleagues to vote 'YES'."

OCULUS supports the call for a First Nations Voice enshrined in the Australian Constitution, and we encourage you to take action:

65,000 years of speaking, and still no Voice. The time to change that is now.